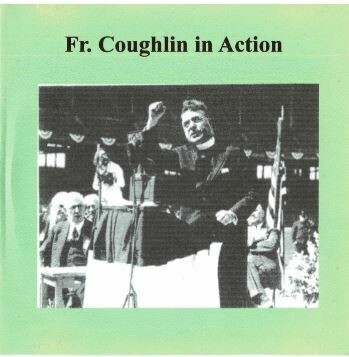 Father Coughlin was a Catholic priest at Royal Oak, Michigan's National Shrine of the Little Flower Church. He was one of the first political leaders to use radio to reach a mass audience, as more than forty million tuned to his weekly broadcasts during the 1930s. Early in his career Coughlin was a vocal supporter of Franklin D. Roosevelt and his early New Deal proposals, before later becoming a harsh critic of Roosevelt as too friendly to bankers.

In 1934 he announced a new political organization called the "National Union for Social Justice." He wrote a platform calling for monetary reforms, the nationalization of major industries and railroads, and protection of the rights of labor. The membership ran into the millions, resembling the Populist movement of the 1890s.

After hinting at attacks on Jewish bankers, Coughlin began to use his radio program to issue antisemitic commentary, and later to rationalize some of the policies of Adolf Hitler and Benito Mussolini. The broadcasts have been called "a variation of the Fascist agenda applied to American culture". His chief topics were political and economic rather than religious, with his slogan being Social Justice, first with, and later against, the New Deal. Many American bishops as well as the Vatican wanted him silenced, and he was eventually silenced by his superiors.

Save this product for later
Display prices in: GBP